How to Vote Kick Yourself in CSGO

Learn how to start a vote to kick youself from the game.

We’ve all seen it happen: a funky player calling a vote to kick themselves out of a game. And we’ve probably all wondered: how did they do that? For many, the question remains a rhetoric, having left their thoughts just as quickly as they pressed F1 or F2. For others, such as yourself, it’s something you seek an answer to - perhaps out of curiosity, or perhaps that you can be the one to vote kick yourself from a game in the future. Whatever your destiny, you’re in the right place - because this article has all the answers…

…that is, provided the answers are relating to kicking yourself from a matchmaking (or other) CSGO game. Unfortunately, we can’t give you answers as to why your aim is so bad.

Once you’ve got the developer console open, type the following command into the console:

After using the status command, note down the two numbers next to your name in the list of players that is printed to the console. The two numbers you’ll need are highlighted in the image below: 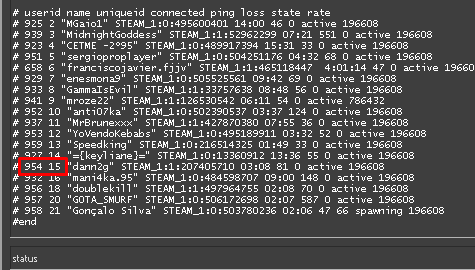 After retrieving those two numbers, add them to the end of the following command:

So, to kick ourselves, using the numbers highlighted in the image above, the console command would look like this:

Here’s an image of what would happen after using that console command: